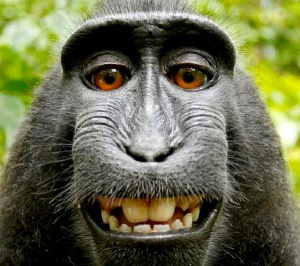 As exciting as singing “Happy Birthday” can be, the bigger copyright story to make recent headlines is the lawsuit filed by PETA alleging copyright infringement on behalf of a macaque monkey. In 2011, Photographer David Slater, the defendant in the lawsuit, was in Indonesia to photograph crested black macaque monkeys. A camera on a tripod was left unattended attracting the interest of a group of macaques that began taking self-portraits by self-operating the camera shutter. A macaque known as Naruto, the named plaintiff, left his unforgettable smiling face on Slater’s camera. The “Monkey Selfie” went viral and Naruto unknowingly became an Internet star. Fatefully, in an early interview, Slater hyped the photograph saying that Naruto alone took the photograph. Slater later published the Monkey Selfie in book called “Wildlife Personalities.”

Current copyright protection in the US is derived from the Constitution. Federal law grants original works of creativity, like music, literature, or architecture, protection from reproduction without the author’s permission.1  Although counterintuitive, authorship in photography is vested by default in the one operating the camera. Had Slater claimed he was the one who took the photograph and not the macaque, there would be none of this monkey business. That principle of copyright law was not lost on Wikipedia and other outlets that soon reproduced the Monkey Selfie without permission from Slater. In response to Naruto’s fame and Slater’s public outcry, the US Copyright Office updated its policy last year to restrict copyright protection only to works produced by humans.

Good news for Naruto, bad news for Slater, PETA now seeks judicial decree to extend copyright authorship to intelligent animals. The suit asserts that the proper author of the Monkey Selfie is the macaque Naruto, and the unauthorized publication of it by Slater and others is copyright infringement. Naruto seeks damages from revenue generated by the Monkey Selfies for the benefit of Naruto and his fellow macaques marauders. The case is the first of its kind. Observers of these sorts of things are hoping for a trial, but admit that it is unlikely to result in any victory for animal rights. PETA argues that copyright statute makes no distinction on which species may acquire authorship. Slater says the copyright protection is only afforded to human. Naruto says “Oo Oo Ah Ah!”